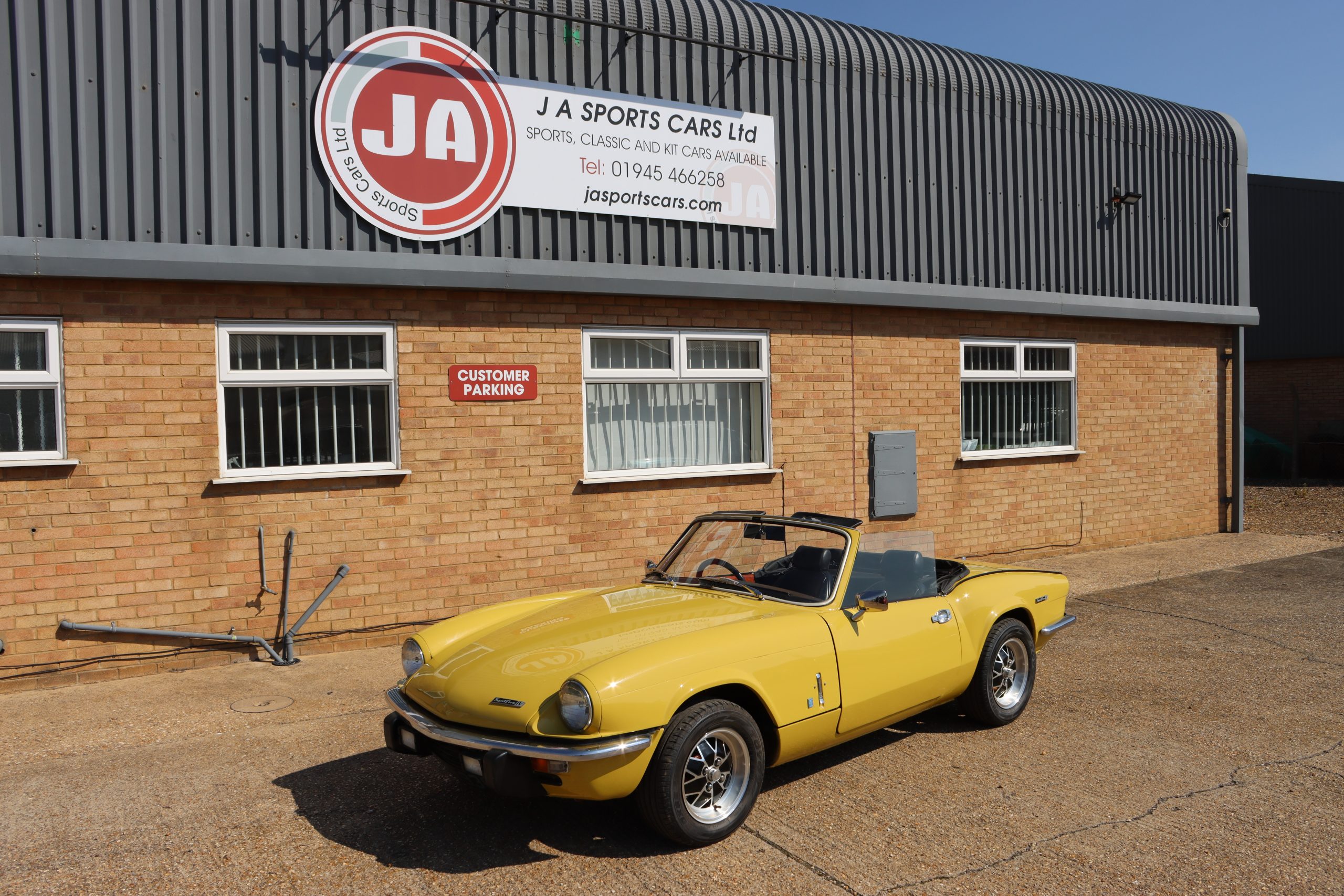 The Triumph Spitfire is a British front-engined, rear-wheel drive, two-passenger convertible sports car introduced at the London Motor Show in 1962 and manufactured between 1962-1980. Styled for Standard-Triumph in 1957 by Italian designer Giovanni Michelotti, the Spitfire was manufactured for the duration of its production at the Standard-Triumph Canley works — and evolved over a series of five production iterations, with a approximately 315,000 manufactured over 18 years.

Developed on a shortened variant of the Triumph Herald saloon/sedan's chassis, the Spitfire shared the Herald's running gear and Standard SC engine. The design used body-on-frame construction, augmented by structural components within the bodywork and rear trailing arms attached to the body rather than the chassis. A manually deployable convertible top, substantially improved on later models, provided weather protection and a bespoke hard-top was available as a factory option.

Popular in street and rally racing, Spitfires won numerous SCCA National Sports Car Championships in F and G Production classes; won its class at the 1964 Tour de France rally, coming in second overall, and won the 1964 Geneva Rally. In 1965, a Spitfire won its class in the Alpine Rally.

The Spitfire nameplate refers to the World War II fighter plane of the same name. Assembled at Canley in August 1980 shortly before the factory closed, the last Spitfire was an Inca Yellow UK-model including the factory hardtop and overdrive options. Never sold to the public, it remains on display at the British Motor Museum.

The Mark IV featured a redesigned rear design similar to the Triumph Stag and Triumph 2000 models, both also designed by Michelotti. The front end was revised with a new bonnet pressing eliminating the weld lines on top of the wings/fenders, door handles were recessed, the convertible top received squared-off corners. The interior was revised to include a full-width dashboard, with instruments ahead of the driver rather than over the centre console, initially finished in black plastic and beginning in 1973 finished in wood.

Importantly, the heavily criticized rear suspension was decambered, incorporating what Triumph called a "swing spring". One leaf of the suspension "stack" was eliminated and only the bottom leaf was attached rigidly to the differential. The remaining leaves were mounted to pivot freely — eliminating the worst characteristics of the original swing-axle. This was a different approach than that taken with the Triumph GT6 Mk II (GT6+) and Triumph Vitesse Mark 2, both of which received new lower wishbones and Rotoflex half-shaft couplings. The result on all these cars was improved handling.

This Inca Yellow car has been maintained fastidiously and has NO RUST! It has a 1500 engine and overdrive and drives beautifully. The car also has a nice piece of history. It was mechanically restored on stage at the 2003 London Classic Motor Show as part of the Practical Classics Challenge. This Spitfire won the challenge beating an MGB that was also being restored an featured in an article in the May 2003 Practical Classics Magazine.

The car comes with a usable soft top in good condition AND a hard top that is in need of restoration, but comes with all the parts needed to complete this job.

The interior of the car is in superb condition with hardly any signs of wear.

A new owner will be the envy of other attendees at classic car shows and have a big smile after driving it there!

We know you want some more detail, so here we go. If it's not there, just ask us because we'd love to help you
HISTORY
SPEC
TECH
Mechanically restored by the Practical Classics team at the 2003 London Classic Motor Show
Service History
MOT
All our cars come with 12 months' MOT if required